This is the final week of our group show at Dunoon Burgh Hall, with work made by four cowal-based artists at Cove Park residencies this year. (Sandi Kiehlmann, Jackie Stevenson, Soozie Tarkenter and myself.) The gallery is open 12-4 daily.

Maps of the Other Side, Cove Park, 2018 – by Anoushka Havinden

In July this year, I spent a week at Cove Park, exploring ways of making new work. I took a pile of books, and various ideas I’d been working with including mermaid/selkie stories.

At Peaton Layo, the shingle beach at the bottom of the hill from Cove Park (a good spot for swimming) I found driftwood that suggested a head, and eventually collected the remains of a mermaid figure.

I used this figure to embody a character, to narrate a story that then informed the work I made.

The mermaid was a creature that longed for human life but never settled wholly on land, a self-created, impossible creature pulled in different directions. The poem, written in her own odd, broken Scots, is her last will and testament. 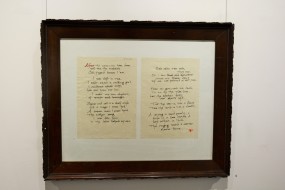 Words and images sprang from the mermaid’s central, invisible and unwritten story. This was informed by the history and geography of that sliver of coastline, the loch beyond, and the Clyde Estuary that flows down past Dunoon.

Peaton Layo: ‘A flat rocky point on Loch Long – it is supposed to be a corruption of the word Leac, a flat stone’ – Ordnance Survey Name Book